The rail training cabin is aimed at the current shortage of applied talents in the field of rail transit in my country, and the continuous upgrading of rail transit station equipment requires high quality of employees. Accurate and fast troubleshooting in a short period of time to restore equipment to normal operation requires more practical training.

The orbital training module is the place where the astronauts work and live after the spacecraft enters orbit. In addition to living equipment such as food, drinking water and urine collectors, there are also instruments and equipment for space applications and scientific experiments.

3. The orbital training module is simply the working and living module of the spacecraft in orbit. 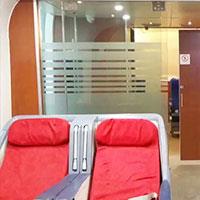 Previous: The purpose of the orbital training module

下一条: The significance of high-speed rail cabins for flight attendant training and education